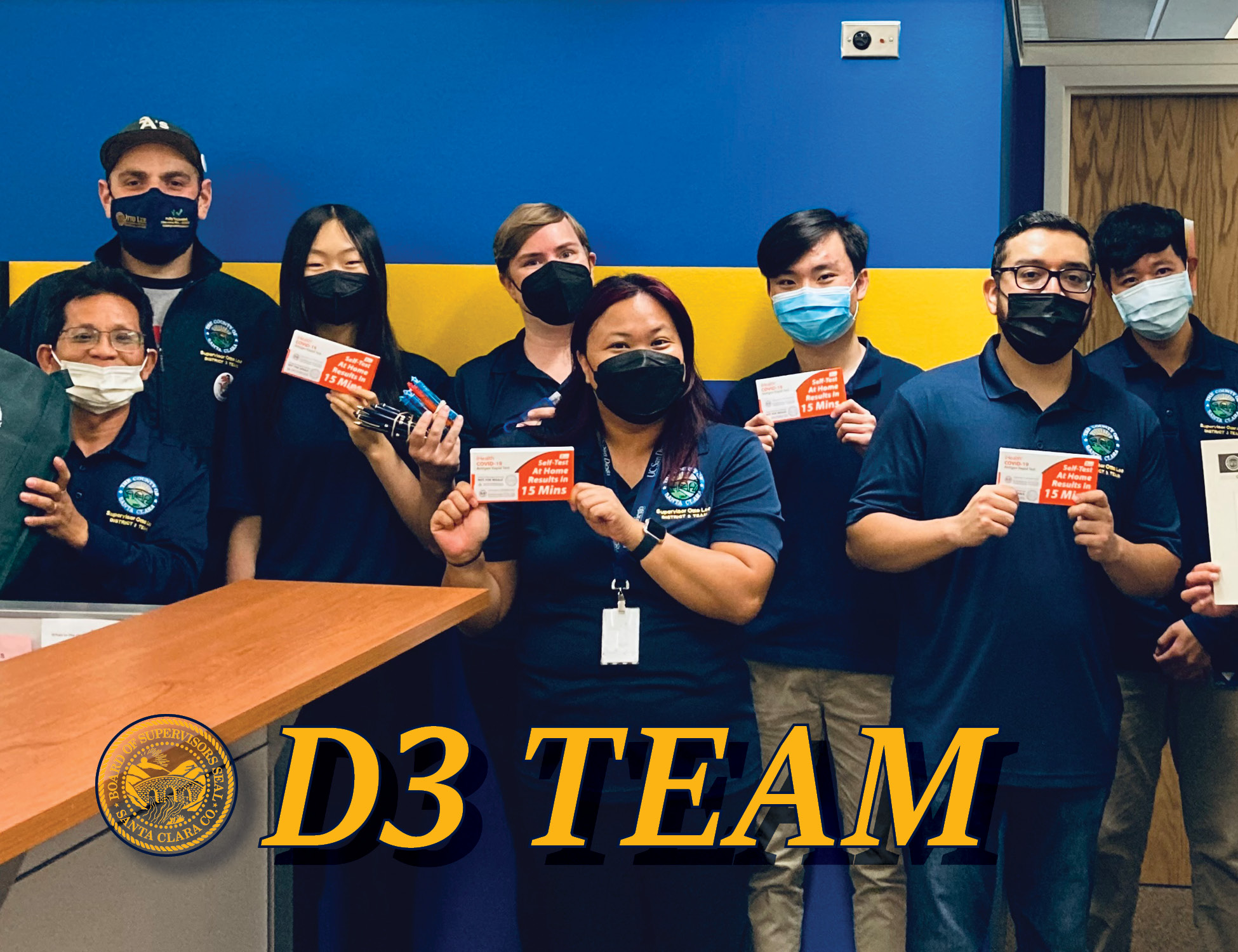 Welcome to your District 3 Team - Please contact us anytime.

Wendy Ho is a community advocate and civic leader with over 10 years of experience working on public policy at the local, state, and federal level.

Prior to joining the D3 office, the majority of Wendy’s career was in the nonprofit sector, serving most recently as the Chief Strategy and Policy Officer for the Silicon Valley Council of Nonprofits. Her experience also includes policy roles with United Way Silicon Valley, the Asian & Pacific Islander American Health Forum, and U.S. Congress.

Wendy has served her community on the San Jose-Evergreen Community College District Board of Trustees since 2012. She earned her MPA from Indiana University, and BA Political Science & BA Japanese Studies from UC San Diego.
---

A Santa Clara County native, Mark has been an active member of our community his entire life. Prior to joining the D3 office, Mark served as Campaign Manager for the 2020 campaign. His leadership of a diverse team of staff and volunteers was integral to the team’s success.

Mark and Carolyn, his wife, live in Milpitas with their two dogs and two cats, and love spending time with their seven grandchildren. He received his B.A. from the University of California- Berkeley and a J.D. from Lincoln Law.
---

Michelle has devoted her career to public service and community-building, born and raised in San Jose. She has been a champion of equity, opportunity and justice for immigrant families, youth, and women. Prior to joining the D3 office, Michelle worked for Campbell Union School District.

She has served as former Chief of Staff to Santa Clara County Supervisor Dave Cortese, District 3. Combined with her experience at the Santa Clara County Office of Women’s Policy, and a former Commissioner to the Santa Clara County Commission on the Status of Women and Girls. She also has made major contributions through her work with the League of United Latin American Citizens (LULAC), and currently serves on the California LULAC State Executive Board as Deputy Director for Women. Michelle received her BA, from National Hispanic University/SJSU and her MPA, from National University.

Elica joins Supervisor Lee’s office after spending many years in academia. Elica earned her PhD in Developmental Psychology from the University of Texas at Dallas examining the developmental origins and outcomes of social aggression, Borderline Personality Disorder, and how adolescents’ digital communication relates to adjustment. After completing her PhD, Elica did her postdoctoral work in Developmental Neuroscience at the University of California Los Angeles, where the focus of her research was on characterizing the neural mechanisms underlying adolescent behavior with the intent of informing policy.

Additionally, Elica is a former Organizing for Action fellow, and fellows manager, and a 2019 Emerge California alum, where she was elected class Vice President. She lives in San José and enjoys spending time with her niece.
---

After graduating from Occidental College, Sandy's career began in Southern California organizing communities to advocate for the LBGTQ+ community in support of positive legislative and legal outcomes, and then to Sacramento managing statewide media campaigns. Sandy then earned a Governor’s Appointee, first with the Governor’s Office, and then in the California Department of Transportation.

Sandy is a volunteer at the Billy DeFrank LGBTQ+ Community Center as a Board Member and Advocacy Coordinator. She is also active with local sporting organizations and enjoys the beautiful natural environment that makes Santa Clara County and the whole of Northern Californian such an extraordinary place to call home.
---

Kevin is a familiar advocate and member of the District 3 Team, who has years of experience working on public policy on behalf our community. Prior to joining Supervisor Lee’s office, Kevin was a policy aide with Supervisor Lee’s predecessor, then-Supervisor and now California State Senator Dave Cortese. Kevin has strong relationship across the County and with the families of District 3.

Born and raised in Santa Clara County, Daniel covers policy areas health care, social services, education, and more. Prior to this role, he was a mental health program specialist for School Linked Services and allcove in the County of Santa Clara Behavioral Health Services Department, a San José State University adjunct faculty member teaching epidemiology in the Public Health and Recreation Department, and an equipment intern for the San Francisco 49ers.

Daniel earned his Master’s in Epidemiology/Biostatistics and Bachelor’s in Public Health at the University of California, Berkeley School of Public Health. He served as a defensive student assistant and student equipment manager on the California Golden Bears football team. He enjoys running, weightlifting, and playing basketball in his free time.
---

Born and raised in San José, Javier attended Santa Clara University where he received a B.S. in Political Science and Ethnic Studies. He worked in the office of San José Councilmember Sergio Jimenez as a Policy Intern during his time as an undergrad. After graduation, Javier worked at Sacred Heart Community Service as an Education Policy Organizer working with local Latino parents on advocating for learning loss funds to be used to fund afterschool tutoring programs at all schools throughout San José Unified School District. Javier covers policy areas in public safety and social justice, among others. In his free time, he enjoys working out, running and watching sports.
---

Huy is a longtime community advocate, serving on the boards of various non-profit organizations and community-based organizations that mobilize for the rights of immigrants and people of color. He is also a partner with Justice at Work Law Group, a law firm focused on worker's rights and social justice.  In that capacity, he is also part of the Wage Theft Coalition which has enacted wage theft policies in Santa Clara County, Santa Clara Unified School District, and the cities of Milpitas, Sunnyvale, and San José.  His firm was recognized as Small Business of the Year in 2016 by former Senator Jim Beall.

Huy takes on the role of Special Projects Coordinator in the District 3 Office.  Huy also serves on the Housing and Community Development Commission and the Charter Review Commission for the City of San José, and the Anti-Hate Crimes Task Force for Santa Clara County.
---

For over forty years, Naomi has worked as a social worker in a variety of capacities, with 25 of those years focused on executive management in the local nonprofit community. Prior to joining the D3 office, Naomi was the Senior Director of Social Justice at the YWCA Silicon Valley.

Naomi also serves our community as a Trustee for the Fremont Union High School District Board, and is a member on various local and state-wide nonprofit boards. She was appointed to serve on the SCC Commission on the Status of Women and the SCC Housing and Community Development Advisory Commission, on the City of Sunnyvale’s Cultural Diversity Advisory Committee.

She is an active community volunteer in her children’s schools and continues to volunteer at her temple, the jails and more. She lives in Sunnyvale with her husband Bob, they have 3 young adult children, and Miso their family dog.
---

The-Vu is a familiar advocate and member of the District 3 Team, serving the Santa Clara County community for more than thirty years. Prior to joining Supervisor Lee’s office, The-Vu was with Supervisor Lee’s predecessor, then-Supervisor and now California State Senator Dave Cortese. His connections and roots to District 3 and our community are deep and helps connect our Vietnamese residents with services and support.

Prior to joining D3 Team, The-Vu worked for Youth Empowered for Success, a Division of Catholic Charities. He is the Co-Founder of the Vietnamese American Center. He worked as Policy Aide in the San José City Council District 8 office. The-Vu and his wife live in San José with their three children along with his mother, sisters, and brother.
---